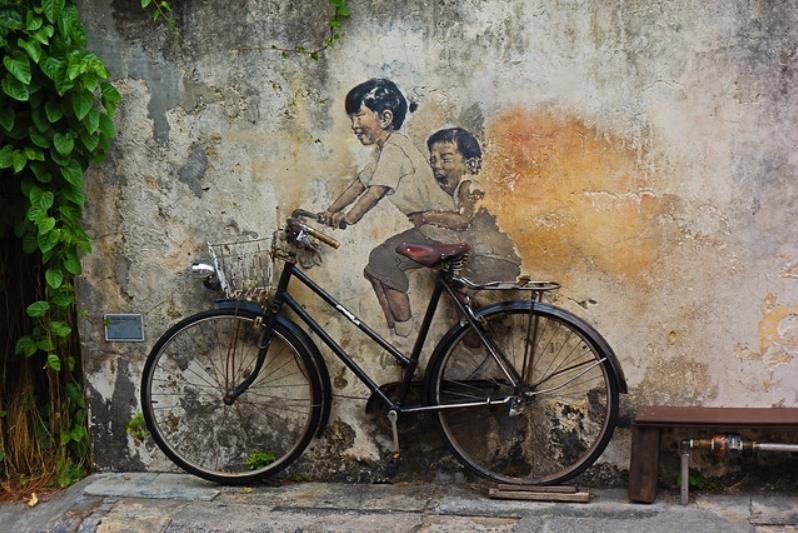 And How Banksy Lost Trademark Applications for His Own Artworks

We’ve all seen these artworks adorning the backdrops of our friends’ and family’s Instagram photos, even our own. Street art is a visual art which has gained much popularity in recent times. Street artworks are displayed in areas which permit the general public to easily view them. Street art is used to not only provide aesthetic value, but also deliver an important message.

Penang was not quite the centre of attention for international tourists until Ernest Zacharevic, a Lithuanian artist, pivoted the fate of the crumbling UNESCO heritage city. Among the 100+ artwork scattered around Georgetown, his works are the most visited and admired. His work celebrated the people of Penang on such a personal level that the portraits soon became world-famous.

You might notice little shops near these hot spots selling “merchandise” with Ernest’s artworks printed on them: greeting cards, notebooks, bookmarks, water bottles, keychains, and pretty much any souvenir item you can think of.

Who owns the rights to these merch items?
Who benefits from the sale of these products?

And to further stretch the thought, if you decided to take a photo with the entire artwork in it and mass produce your prints, do you have to offer a cut to the artist for the sale of these products?

The Case of Banksy: How the Street Artist Lost Four Trademark Applications.

Britain’s most famous and anonymous street artist recently suffered a total of four trademark losses against a greeting card company for using his artwork in their products. These four trademarks include some of Banksy’s most iconic murals: Love is in the Air, Radar Rat, Girl with

an Umbrella and Laugh Now. The European Union Intellectual Property Office (EUIPO) panel said the trademark registration applications are void because the artist refuses to reveal his identity, and thus, cannot even be proven as the true owner of these artworks in the first place.

Radar Rat, originally known as ‘Sonic Rat’ which appeared on a few walls in the streets of London.
Source: My Art Broker

Not owning these trademarks means that other people and corporations can use Banksy’s artworks.

The greeting card company, Full Colour Black, argued they should be able to use an image of the Flower Thrower stencil mural, which Banksy painted in Bethlehem, because of the artist’s anonymity. On the other hand, Banksy claimed that Full Colour Black should not even be contesting for the trademark he holds to his art, especially when they are trying to take custody of his name so they can sell their fake Banksy merchandise legally. 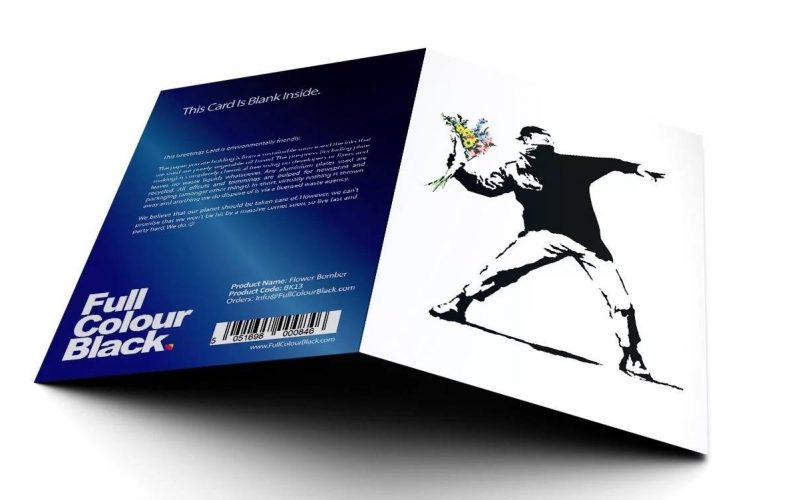 Early in the dispute, Banksy’s representatives, was indeed successful in the application for a trademark of the ‘Flower Thrower’ (a brand icon derived from Love is in the Air), but that was later overturned after a two-year dispute of going back and forth. The panel involved said that the decision ruled against the artist because he could not be identified as the unquestionable owner of such works because his identity remained hidden. In addition to his persistence to remain anonymous, Banksy, for the most part, paint graffiti on other people’s property without their permission. If he painted on canvases or his own property, he might’ve still had a fighting chance.

In retaliation, Banksy set up a bricks and mortar gift shop, Gross Domestic Product. It offered only online sales but was operating in Croydon, south London. This shop was the catalyst that launched the trademark case to the public eye.

However, the store sold “impractical and offensive” merchandise, as claimed by the EUIPO, including disco balls made from used police riot helmets as well as replicas of the stab vest worn by Stormzy during his Glastonbury headline set in 2019. In addition, the trademarking panel found that Banksy’s intention was not to use the mark as a trademark to commercialise his goods, but only to play around and poke fun of the law. These satirical actions plus the nature of his shop are inconsistent with honest practices and had definitely undermined his trademark case.

Trademark Vs Copyright: Why Banksy Had to Fight for His Trademarking Rights?

Copyright protects artistic works such as paintings, and trademarks protect logos and signs that help consumers to make informed purchase choices when buying products. Copyrights are automatically granted, whereas trademarks require a lengthy application which begin with a search to see if a similar mark already exists.

Despite the fact that his artworks are created in public spaces and available for everyone to enjoy, he automatically owns the copyrights to these works. There is no specific system of copyright registration in most countries, including the UK and Malaysia. Copyright, unlike trademarks, are owned by the artists who created the artwork throughout their lifetime plus up to 70 years after their death (under UK law).

In Malaysia, artwork copyrights subsist during the life of the creator plus 50 years after death.

In general, copyrights allow artists to claim royalties or have a say over how their work is used.

However, if Banksy ever wanted to enforce his copyright, he would most definitely have to reveal his real identity in order to prove he is the “true owner” of his works. Thus, the greeting card company, in this case, was doing nothing wrong. They were not breaching copyright by just taking photos of Banksy’s art. Even when they’re licensing them for sale around the world for merchandise, he owes no proceeds returning to the artist.

The irony is that Banksy had once written that copyright was “for losers”.

Despite his clear dislike of copyrights, he tried to rely on trademark law to protect his artworks. Why? Invoking copyrights would require Banksy to reveal his real name and remove his aura of mystery and affect the commercial value of his art. Whereas a trademark could be registered under a “brand” where he need not necessarily mention his legal name.

As for the trademarking of Banksy’s works, the icon, namely the flower thrower, was not approved because the mark was not distinctive enough. What does “not distinctive” mean? Think of a trademark as more of a logo. For example, compare Banksy’s work to another famous artist, Andy Warhol, who was successful in his trademarking. Warhol’s brand is clear and recognizable. Ironically, Warhol reportedly didn’t draw the banana himself. He appropriated a 1960s advertising image, but the banana is now synonymous with Warhol’s name. He trademarked the banana after he was involved in a copyright dispute for licensing the image for iPad accessories.

In such a capitalist economy, copying is not only expected, but in some ways encouraged. Of course, copyright is a legal law that makes an exception to that rule. Plus, if you, like Warhol, intend to use an artwork as a brand, registering it as a trademark can give you intellectual property protection.

Of course, graffiti artists that express their artwork without permission in public spaces typically do not want to identify themselves as they might face criminal prosecution. This puts them in a bit of a bind. Indeed, it is difficult to be protected by the law in one way when you are violating the law in another way. If anyone was allowed to assert copyright anonymously, the whole copyright system would become obsolete. People would be flinging unwarranted claims around as they wish, without providing substantial evidence that they are the rightful creator.

Let’s go back to the merchandise and souvenirs made from Georgetown’s street art. Do these infringe the artists’ copyright? Although copyright infringement in relation to street art can sometimes be challenging to define, the key factor which determines if infringement occurred boils down to the nature of use. 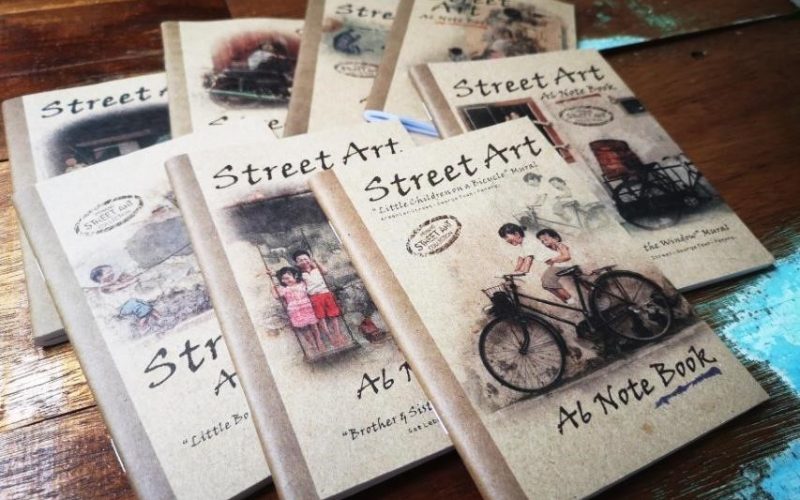 Notebooks are one of the most popular souvenir items which were reproduced from street art.
Source: Shopee Singapore

What about Penang’s Street Art?

According to the intellectual property laws of most countries, including Malaysia, all original artworks including street art receive copyright protection from either their creation or in less common cases, their creator’s registration for a copyright.

Georgetown’s street art is by and large, commissioned and endorsed by the local government. Only a handful are not authorised by the Penang Public Arts Review Panel (PARP). In short, the artists painted these artworks legally and own the copyrights and can benefit from the intellectual property protection afforded by a copyright. So, strictly speaking, copies of such art require the explicit permission of the copyright owner. However, these artists do have a broad understanding that these artworks are commissioned to be displayed to the public and will likely be reproduced. For the most part, these artists are simply happy to share their work with visitors.

Zacharevic’s painting in progress of “Little Children on a Bicycle”.
Source: Time Out

Where some street art might be unauthorized, it is still possible for them to own the copyright, unless the street art’s content breaks the law. In the context of intellectual property rights in Malaysia and the copyrightability of illegal street art, the content of the artwork and the legality of the act of creating the art are not to be associated. Street art is copyrightable regardless of its authorization.

Artists who receive intellectual property protection for their artwork in the form of a copyright or trademark can benefit from registration in many ways. The trademarking failure in the Banksy case could end up being taught in law schools and art schools because it is a realworld case that will get academics interested. If you are a producer of art, consider getting a trademark agent to run a trademark search to see if you can potentially be the rightful owner of your brand of work.

What if your artwork borders on a design and engineering? You may need to deal with a patent registration. Talk to a patent agent to see which type of intellectual property registration suits your production most.